Anchoring Productive Use on Mini-Grids

Abigael Okoko writes in our third and final blog in the series from the SIGMA team at CFIA, on productive uses of energy in mini-grids, and the benefits of anchor consumers in new mini-grid projects.

Energy is critical to the realization of Kenya’s Vision 2030, which seeks to transform Kenya into a newly industrializing middle-income country providing a high quality of life to its citizenry. In Kenya, like in many other developing countries, electricity is still not accessible to all since the national grid is yet to reach all areas in the country. The Kenyan government has embarked on a mission to provide access to sustainable and reliable energy for all.  This has seen the rate of connectivity improve from 32% in 2014 to 75% in 2018.

However, challenges still exist. Some Kenyans still remain with no access to electricity. The need to extend the national grid to all areas in the country is often faced with challenges due to the limited national budget. Further, some areas—which are sparsely populated—are remote with tough/rough terrain and thus difficult to access, e.g., hills, valleys, and islands.

To bridge this gap, different stakeholders, including private partners/developers and government agencies, have come in to electrify these areas by establishing mini grids or off-grid systems as part of service delivery in the underserved counties.

Mini grids are a small set of small-scale electricity generators, energy storage systems and distribution networks that can supply electricity to small, localised group of customers and operates independently from the national transmission grid.

Adoption of anchor projects for productive use of electricity

Establishment of anchor projects guarantees predictable use of electricity

The development and establishment of mini grids, just like many other infrastructural developments in Kenya, are capital intensive ventures and require high upfront costs. Developers, therefore, must mobilise resources in the form of grants and loans to be able to put up the infrastructure necessary to supply electricity. These projects are expected to be profitable at the end of it all with an estimated return-on-investment period of between 8-15 years.

After installation of some mini grids and supplying the electricity to households within the catchment area, some developers realized that relying on households as the sole electricity consumers was not profitable from a business perspective. The per capita electricity consumption in the rural areas is often low and therefore, building the demand for electricity by rural households is a slow and lengthy process. The use of electricity is mainly lighting, charging mobile phones and in some cases, powering televisions and radios which consume minimal electricity from these mini grids.

On the contrary, urban areas are densely and heavily populated. The urban areas have a higher demand for electricity due to the diverse use of electricity presented by the different economic activities and socio-economic groups in urban set-ups. However, where the consumption is low, the payback period is lengthened and may not even be achieved in the long run.

With regards to this, mini grid developers have developed different approaches (business models) to ensure profitability and sustainability of these mini grids while also delivering electrical energy to the populace in these underserved areas.

One such business model is establishment of anchor projects that provide an anchor load, which ensures having a customer with predictable use of electricity. Interviews with operators and developers during primary data collection for the SIGMA project indicated there is often an excess capacity of the mini grids which generate more electrical energy than what is consumed by the households. This is more so during the day when most households do not require much of the electricity generated by these mini grids.

The peak demand for households is observed to be between 5 a.m. and 8 a.m. and again between 6 p.m. and 9 p.m. when the sun goes down, therefore, relying on battery storage for electricity supply especially for solar mini grids. However, the electricity generated during the day often lies idle. To utilize this electrical energy generated during the day, large projects that would consume a significant amount of electricity generated from the mini grid are targeted. Examples of anchor projects that have been incorporated in these mini grids include:

1. Dudu poa project by Powerhive in Nyamira County which involves rearing of Black Soldier Flies (BSF) using the organic waste collected from the nearby municipal markets.  The BSF is reared and once dried is sold as chicken and pig feed to the farmers. 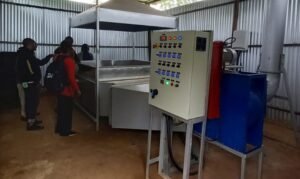 2. Kuku poa project by Powerhive in Kisii County, which involves running a chicken slaughterhouse. Poultry farmers from the catchment area who are normally organized as Community Based Organisations (CBOs) rear poultry and once mature, they are delivered to the slaughterhouse for dressing ready for the market.

3. Ice processing for fish preservation by Nal Off Grid in Longech, Turkana County. The main economic activity of Longech area is fishing. As such there is need for preservation of the fish which is a highly perishable product compounded by the high temperatures of the region.

4. Gold mining in Nadwat, Turkana County powered by Nal off grid. The gold mining industry is energy intensive and requires energy for extraction and grinding of the ore.

However, in some cases, some challenges are experienced mainly concerning reliability of electricity. This is more so when the electricity generation of the mini grid is stretched beyond its capacity, which causes a demand supply imbalance. This imbalance leads to rationing of electricity. The replacement of batteries has also been a challenge for some mini grids, and they are thus not able to maintain a regular supply of electricity to their clients; a situation which requires installation of back-up systems by these productive users in order to remain afloat in business and reduce losses.

The development of anchor projects as a business model has allowed rural communities access electricity and other economic benefits derived from them. On the other hand, developers/operators have created a balance between economic sustainability and the provision of electricity to the unserved/underserved households. However, it is important to overcome the operation and maintenance challenges so as to achieve the goal of providing access to reliable electricity to the consumers.