Community Participation in Mini-Grids Development: Key points to focus on

In the first of our blog series from the SIGMA project team at CFIA, Mourice Kausya writes on participatory approaches to mini-grid development, and key lessons for community engagement in mini-grid projects.

Mini-grid developers may have the tacit support from the benefiting community when coming in. Nevertheless, it is equally important that these developers ensure that active community participation and inclusion is achieved. These factors are vital in improving project acceptability and sustainability. What needs to be done in community engagement and participation to ensure mini-grids remain sustainable? From our discussions with different mini-grid developers in Kenya, it is evident that community participation is critical in gaining community buy-in and support. Our study reveals stark differences in different sites based on the level of community engagement.

"Communities will be mostly curious to understand how the project will benefit and affect them. Understanding the local context and their needs is critical for project survival, something well achieved through engaging the community."

Key points to be considered when mini-grid developers engage the community are:

Modes of entry into the community

The mode of entry into a community used by a developer largely determines the success or failure of the mini-grid project. Developers agree that investing in social capital is critical for the success and sustainability of the project as it is deemed necessary to be on the same page with the community from project onset. A developer can use several entry points to gain access to a community, which to some extent brings relatively different outcomes.

A mini-grid developer might be formally introduced to the community by the local government. This approach is apparent in Turkana County where the County Energy Department plays a big role in assisting the developers to secure sites, engage the community on matters land and community mobilization, and conduct surveys to collect the views of the community in a public forum (baraza). 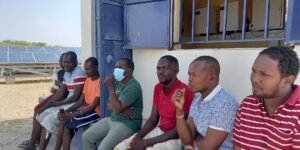 After the developers have entered the community and made their plans known and agreed upon by the community members, the next step is to look for a suitable site for project construction. The developer is limited to specific locations where the resources needed in electricity generation, i.e., water, wind and/or sunlight are available. Further, the population density of the surrounding areas matters a lot when choosing a site. This is done through GIS analysis, and where the density is medium or low, the site is abandoned. The number of businesses in the surrounding areas also contributes to site selection, whereby areas that have many businesses are deemed more viable.

Mini-grid developments require a considerable amount of land. Given the importance of land for these projects, most developers agree that meaningful community outreach and consultation need to be done prior to system installation. Most developers disclosed that they leased the land from either the community (where land is communally owned) or individual landowners (where land is individually held). Some communities, E.g., in Turkana and Kajiado counties, allotted the developer some land for free (still owned by the community) for construction. According to the developers, such land arrangements are vital as they generate the goodwill needed for the success of the project. In areas where land is privately owned, developers mentioned that they preferred leasing the land from the owners at a fee. These leases also attracted an incremental value of an agreed percentage annually. Land, which is an emotive issue, requires honesty especially when it is communally owned, and confidentiality where the land is privately owned. When using communally owned land, community engagement with substantive involvement of the local government was key in ensuring smooth land leasing.

The planning phase in the mini-grid development process is critical and requires attention from both the developer and the community. A careful explanation should be given to the community to enlighten them on what is happening in every step. The developer should also ensure they involve everyone in the community to avoid breaking the social fabric. In Turkana, some community members were adamant that most of the decisions regarding the mini-grid project were made by people above and then imposed on them. The project currently faces myriads of technical and operational challenges and dwindling community support has worsened its situation.

Several mini-grid developers also revealed that community members are involved in the construction process and their contribution is mainly by providing manual labour at the construction site. Jobs which require little or no expertise such as operator/caretaker, security and manual jobs are given to them as a buy-in process as the developers are aware that sourcing workers from outside the community, especially manual labourers might bring discord among the community members.

Again, it must be insisted that in order to secure commitment and support of the community, strong community representation is required when it comes to operation and maintenance of the mini-grid. Most of these communities lack people with the expertise and knowledge needed to operate and run the mini-grids. Training some of them is vital in ensuring smooth operation because community members feel comfortable when dealing with one of their own and also the operator will be close by in case of technical hitches which require urgent attention.

Since it was their pilot project, the project owner acknowledges the fact that they had no experience in handling communities. They stated that their community participation strategy was not that good at that time and they did not correctly deal with the critical land issue and the possibility of main grid encroaching. This has been an eye opener as they are now experienced in engaging the community, and subsequent projects have been successful.

Missteps in relaying information to community members has brought some developers under fire from the community in other sites. Unrealistic expectations have created discord within the community with the tariff of the mini-grid electricity being quite expensive compared to the tariff from the national grid. Users seem not to understand this fact until they start paying for the power. Apart from a site located inside a refugee camp which is heavily subsidized, users in all the sites we visited had this initial misunderstanding. Again, the limitation on the type of appliances to be used due to the low load capacity was disappointing to some communities who had expectations of using heavy equipment.

In different communities in Kenya, women and men have different views and needs when it comes to energy issues and the involvement of both men and women and other disadvantaged members of the community is important for a developer to understand these differences before making any decisions.

Women in many rural communities in Kenya have very little to say when decisions that affect them directly are made, energy included. Without proper engagement their voice and ideas will not be heard, depriving them of energy uses and energy-based income activities. The community engagement meetings (barazas) should be held at times when women are able to attend with the developers using outreach methods to ensure the women attend.

"The process of involving women in every step of the mini-grid process should be curated carefully to ensure meaningful involvement. Women-led groups are a good way of ensuring their voice is well represented"